Some small-business laptops are light and feature-rich, designed for the entrepreneur on the go. The Toshiba Satellite Pro L300D-EZ1003X ($849.99 list) is at the other extreme: a hefty, plodding 15-inch laptop that's best for a deskbound worker doing generalized office and Internet tasks. The L300D leaves a lot to be desired, between its lack of Bluetooth and fingerprint reader, its noticeable heft, and its subpar overall performance. Among the few bright spots are its reasonable price and a near-absence of crapware.

Aesthetically, the L300D's gray exterior is pretty bare-bones and unexciting. Much like the Toshiba Satellite Pro U400-S1001X, it has a conservative, businesslike appearance. Toshiba clearly is not trying to hit neutral ground between business and consumer notebooks as is the Dell Vostro 1310. The L300D measures 1.5 by 14.3 by 10.5 inches (HWD). At 5.7 pounds (with battery), it's considerably heavier than the Dell 1310, but that shouldn't be a problem in a system really intended for in-office use. The 15.4-inch widescreen produces eye-popping presentations (in 1,200-by-800 native resolution), impressive video, and colorful charts, thanks to Toshiba's TrueLife screen technology. Unfortunately, in stark contrast to the Vostro 1310's matte finish, the TrueLife screen produced an annoying glare when viewed outdoors.

One area where the L300D definitely falters is in its keypad. It could be the positioning of components beneath the keyboard, but all the keys on the left-hand side (left of V, F, and R) would 'lean in' considerably when only one key was pressed. The overall typing experience is unimpressive. The keyboard is soft, with little tactile feedback. It wasn't as responsive as the Dell 1310, and certainly not as good as the one found on the Lenovo ThinkPad T61 Widescreen. The touchpad was responsive, although the left and right mouse buttons felt stiff. Overall, the audio was just right, and never overbearing, unusual for a business laptop.

The L300D's feature set is fairly standard. All of the features present were ones I expected, including an internal DVD±RW drive, a trio of USB 2.0 ports, and a multi-card reader that accepts SD and Memory Stick cards. What I wasn't expecting, even at this price, was the lack of a fingerprint reader—it's a business essential. As for video output, the only option for hooking up the laptop to an external monitor is VGA, which is typical for a business laptop. (There's no available FireWire port.) The built-in 1.3-megapixel webcam above the LCD is useful for videoconferencing. Inside, a 160GB hard drive should provide ample space for some time.

My configuration came with a 2.1-GHz AMD Turion 64 X2 TL-62 processor and 2GB of DDR2 system memory. For business users, this is enough power to tackle productivity apps like Web browsing, e-mail, Excel, and Word documents. The included OS, Windows XP Pro, doesn't require as much memory as Vista does, yet thanks to the 2GB included, you'll be set if you do upgrade to Vista. For now, using Windows XP Pro lets you save money on the system.

The 128MB integrated AMD Radeon X1250 graphics are an improvement over Intel integrated graphics, providing noticeably higher video clarity, but systems like the Dell 1310 one-up the L300D with higher-performing GeForce 8400GS graphics for 3D rendering (which the Toshiba really doesn't have the power for, anyway). For standard business tasks, the Radeon graphics should be fine. Internal Bluetooth is not available, but an optional USB 2.0 Bluetooth adapter can be purchased for $35.99. For wireless connectivity, the L300D features an internal 802.11b/g adapter.

Even with a substantial amount of memory, the Turion X2 processor seemed to drag at the L300D's performance. Its SYSmark 2007 Preview Overall score of 79 pales in comparison with the those of the Intel Core 2 Duo–powered Dell Vostro 1310 (94) and Toshiba U400 (106). Its Windows Media Encoder (WME) and Photoshop CS3 scores were well below the pack as well. Its 2 minutes 2 seconds at WME was about 40 seconds longer than scores for both the 1310 and U400, and its 1:08 at Photoshop CS3 was nearly twice as long as for the Vostro (39 seconds) and the U400 (36 seconds). Though I was unable to run MobileMark 2007 on the L300D (through no fault of the laptop itself), Toshiba says it should get about 2.5 hours on its six-cell battery. 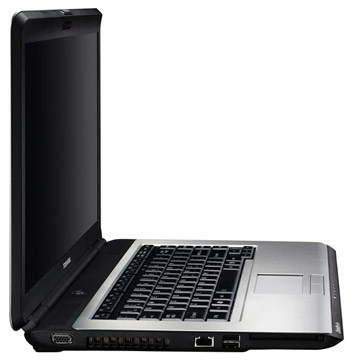 As a small-business laptop, the Toshiba Satellite Pro L300D-EZ1003X seems best for use by employees doing general office work who won't be traveling much, and who work at a start-up or a company on a tight budget. The lack of a fingerprint reader is a disappointment, and the L300D's performance is unimpressive—for a bit more money, much more attractive small-biz systems are available. The Toshiba Satellite Pro U400-S1001X, for $150 more, is lighter at 4.6 pounds (with a 14-inch screen) and is a much better performer. The Dell 1310, also with a 14-inch screen, costs about $400 more than the L300D, is handsome and travel-friendly, performs well, and is eminently configurable.

Bottom Line: The Toshiba Satellite Pro L300D-EZ1003X's performance isn't impressive, and the lack of essentials like a fingerprint reader is a disappointment.